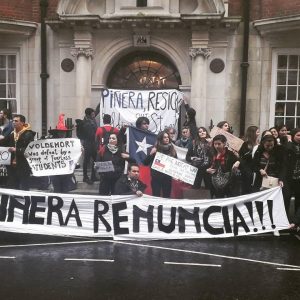 With the referendum to vote on a new constitution at the forefront of the minds of many Chileans, Chile Today talked to Chileans living abroad in the UK to find out how they are reacting to the upcoming referendum. What do they think about voting in the referendum? How are their lives affected by the situation in Chile?

Chileans living abroad offer a unique perspective on the current situation in Chile, as they feel connected to the nation’s crisis and yet are viewing it from afar.

As a consequence, many Chileans abroad have formed groups, such as cabildos and assemblies, to create spaces where they can socialize and discuss issues but, more notably, organize their own demonstrations in solidarity with their homeland.

Uniting in this way has great significance, not only due to the recent protests, but also because the Chilean government has announced that Chileans who are living abroad will be able to vote in the upcoming referendum to decide whether a new constitution should be written.

Chileans abroad, however, cannot vote on the so-called “conventional constituents,” the delegates who will be tasked with writing the new constitution. Some find this to be very exasperating, as they are Chileans and yet their voices are not being heard in the same way as local Chileans.